Rajasthan offers visitors some of the most great travel destinations like Udaipur, Jaipur, Jaisalmer, Bikaner and the attractions of Ajmer add more color to the travel experience of travelers. If you have included Ajmer as your weekend getaway then you can also enjoy other places in the state such as Pushkar, and Jodhpur. There are a lot of sightseeing and things to do in and around Ajmer city, but for this post, we have curated a list of best places to visit in Ajmer in 1 day.

Let’s talk about Ajmer, It is a vibrant city, located just 15 km from the pilgrimage town of Pushkar. The city of Ajmer was originally known as “Ajay Meru”, translated as “invincible hill”. The Rajput king Ajaydeva (Chauhan) founded the city in the 11th century AD and the city remained as the epicenter of the Chauhan Dynasty till the 12th century AD.  When Prithviraj Chauhan became Samrat of India they gave it to Rajput Indu Prakash to take care of the Chauhan kingdom. Then Mughal Sultans defeat Prithviraj to capture Ajmer due the presence of the holy Ajmer Sharif Dargah. The city was handed over to the British a few centuries later, causing Ajmer the only region in Rajputana to be directly commanded by the British East India Company.

Ajmer is a famous tourist attraction, in addition to being a pilgrimage hub for both Hindus and Muslims. The Muslims from all over the world visited tomb of Saint Khwaja, admired equally by every religion. Surrounded by the gregarious lake of Ana Sagar and the sturdy hills of Aravalli. Aside from the Ajmer Sharif, the city is significantly known for the Jain religion, home to a beautiful Jain Temple.

Ajmer is the center for visitors who are visiting Pushkar, the home of Lord Brahma, sacred spot for the Hindus. During Kartika Poornima which falls between October and November, devotees visit Pushkar to take a dip in the sacred lake.

Ajmer is popular for Dargah Sharif, which houses the Shrine of Saint, known as Khwaja Moinuddin Chisti, the founder of Chisti order of Sufism, known for his secular beliefs and noble teachings about peace. It was during his time in Ajmer that Moinuddin earned a reputation of being a charismatic and compassionate spiritual preacher. Moinuddin appears to have been consistently recognized as a great saint after his passing. Local and national rulers came to pray in this Dargah, the dargah grew in fame and size over the years. Rasiya Sultan, Muhammad bin Tughluq, Sher Shah Suri, and Akbar and his descendants Jahangir, Shah Jahan, Aurangzeb, Dara Shikoh, and Jahanara Begum had also visited the Dargah.

Ajmer Sharif is one of the best sightseeing places to visit in Ajmer, in addition to being a pilgrimage hub for both Hindus and Muslims.

The street outside the Dargah is overlaid with shops selling a wide range of items like perfumes, sweets, flowers, and chadars (sacred sheets), offered to Khwaja. While entering the Dargah, one needs to go through a series of large doors made of silver with striking carvings. They open into a courtyard that houses the tomb of Moinuddin Chishti, sculpted out of marble.

The white marble dome of Chisti’s shrine was built in 1532. Dargah has a gold plating on the top and defended by a fence of silver and a marble screen. It is popular among people of all religions. You will see a large cooking utensil called Badi deg while you are moving out from Dargah premises. As per the belief, throwing money in the vessel will make all your wishes come true.

The dargah has remained pilgrims site belonging to Hinduism and Islam since ancient times and also attracts Jains and Sikhs. Pilgrims come here from around the world and offer chaddars to the shrine. Pilgrims also give rose leaves, which total up to seven tonnes per day. Women are also allowed to enter the dargah. As per the Dargah, around 20 thousand pilgrims visit the site every day.

The Adhai Din Ka Jhonpda was formerly built to function as a Sanskrit college but was later converted into a mosque. It is an effective blend of Indo-Islamic architecture. Designed by Abu Bakr of Herat and constructed by Qutb-ud-Din-Aibak in 1192 CE, and the structured in 1199 CE and was further beautified by Sultan Iltutmish of Delhi in 1213 CE.

A large number of fragments and sculptures of temples are lying inside the complex for security purposes by archeological department. It also shows the existence of a Hindu temple in its vicinity during 11th-12th Century AD.

As per some legends, the Adhai din ka Jhonpda (literally means The shed of Two and a Half Days) because of a two and half-day fair held here in the 18th century, and as per other legends, a part of the mosque took two-and-a-half days to built. There are no entry fees to visit here.

Rajasthan is undoubtedly the most colorful state in India, cities of Rajasthan have different colors which you will feel when you explore them.

If you are a history freak, then the Taragarh Fort will not dissatisfy you. Its big and brilliant architecture will leave all archaeologists in reverence of the fort. Taragarh Fort is one of the best Hillforts in the whole of Rajasthan making it a best places to visit in Ajmer.

The sumptuous Taragarh Fort was built in Ajmer during the rule of the Chauhan Kings in the 12th century AD. Three massive gateways are being its greatest assets that bind the Taragarh Fort namely Gagudi Ki Phatak, Phuta Darwaza, and Lakshmi Pol. Unfortunately, they are in vestiges today. You will also find a crisscross section of tunnels located within the fort which go through the hillside. These tunnels utilized as a den to escape from the attacks of enemies.

October to February:
These months frame the winter season in Ajmer and can consider as a good time to come and see some of the best places to visit in Ajmer. With day temperatures being ideal for an excursion, most of the tourists prefer to visit this city during this time. Winters in Ajmer are commonly mild and not that cold. The average temperature in Ajmer will range between 10 to 20 degrees Celsius, the lowest temperature will not go beyond 5 degrees Celsius.

March to May:
These months constitute the summer season in Ajmer. Summers are hot in Ajmer, particularly in May and June when the maximum temperature can go beyond 40 degrees Celsius. Do not forget to carry sunscreen and an umbrella when you step out.

June to September:
These months constitute the monsoon season in Ajmer. However, Ajmer is not a rainy city but it looks amazing when it rains here as the surrounding mountain range is filled with a lush green environment. This is also an off-season in Ajmer, and hence you would see fewer tourists during this time.

And below is the monthly weather details- 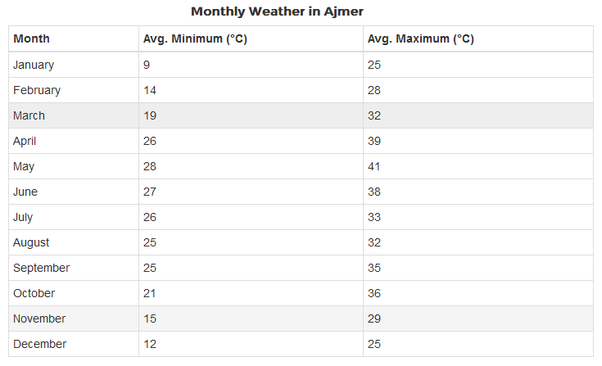 How to Reach Ajmer

The nearest Ajmer airport is at the distance of 27 KM in Kishangarh. The second closest international airport to Ajmer is the Sanganer International Airport in Jaipur. From Jaipur Ajmer is about 140 km.

Ajmer junction is a major railway station of Rajasthan and is well connected to numerous trains running to & from other cities in India.

Ajmer is well connected by motorable highways to different cities across India. It also has excellent  connections by state run buses and more luxurious private ones.