Pushkar is a holy city bordering the Thar Desert in the Ajmer district of Rajasthan state. It is a most revered pilgrimage site for Hindus and sets on Pushkar Lake, a sacred Hindu lake with approximately 50 Ghats (stone staircases) where pilgrims can bathe. Pushkar has more than 400 temples and they are from the 18th century. The most famous among Pushkar temples is the Brahma Temple built by Samrat Pushkar, who is the father of Vedmata Gayatri, who was a chechi kanya married to Lord Brahma. This is one of the famous Brahma Temple located in India. Lord Brahma, known as the creator of this universe, this temple holds a special value in people’s beliefs.

As per Hindu mythology, Lord Brahma freed a bird with a lotus in its beak from heaven to drop to the place where he would perform a huge yagna. That place was Pushkar and that is why it is a significant pilgrimage spot for Hindus.
Pushkar is well known as the Pushkar Camel Fair. At the Fair, you will find a trading festival of cattle, horses, and camels. It is held over seven days in autumn heading Kartika Purnima according to the Hindu calendar (in November month).. It attracts around lakhs of people.

The city is a sacred city by the Hindus, liquor consumption, meat, and eggs are not allowed in it. Tourists should not bring any liquor and meat while traveling to Pushkar.

The Brahma temple at Pushkar is the most famous temple in the world dedicated to God Brahma but it is not the only temple of Brahma in India. However, it is the oldest temple dedicated to Brahma. As per ancient books, compared to other gods, Brahma was a lot more lenient and would bless his devotees whole-heartedly.

The temple structure was built during the 14th century, then rebuilt later. The Brahma temple is made of marble and stone slabs. It has a separate red spire (shikhara) and a hamsa bird motif. The temple shrine holds the statue of four-headed Brahma and his companion Gayatri (goddess of Vedas).

This Temple is one of the most visited Brahma temples in India. In Kartik Poornima, many pilgrims visit the temple and take a dip in the lake, offer prayers to the deity. 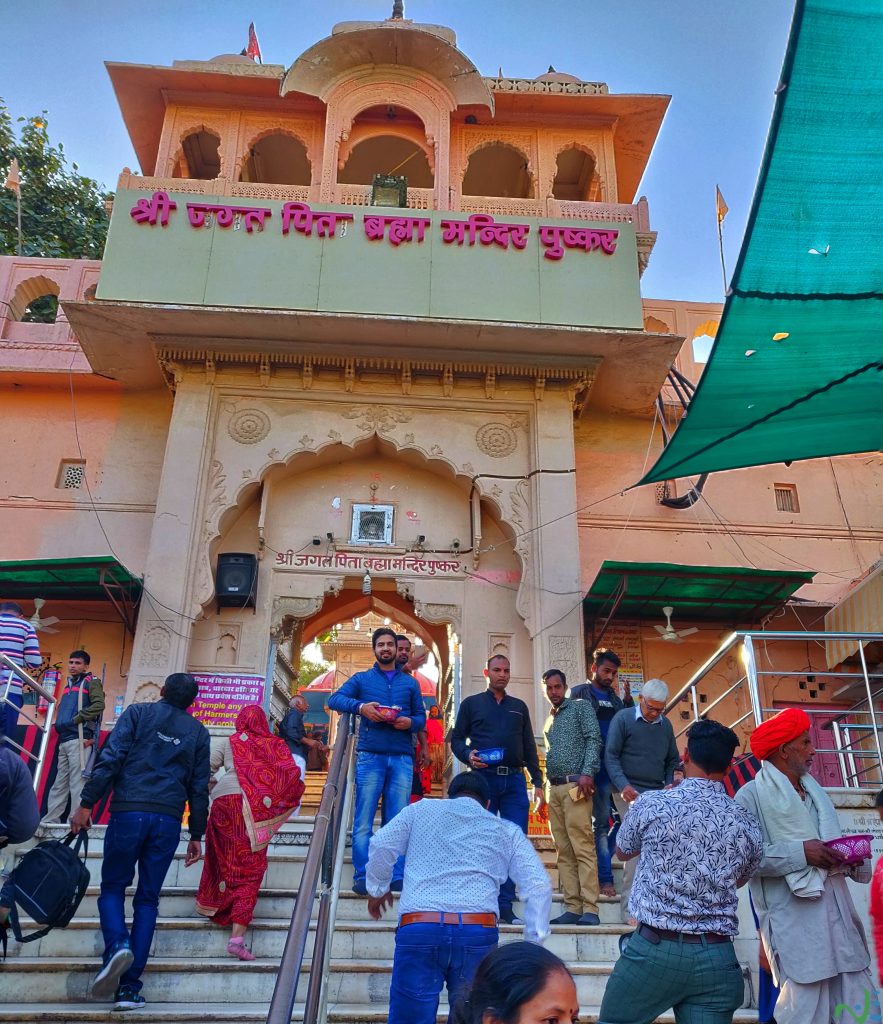 Pushkar Lake is one of the holiest lakes for Hindus and the place is accessed mostly for religious purposes only. Ramayana and Mahabharata mention Pushkar Lake as Adi-Tirth. Surrounded by more than 400 temples and 52 Ghats with different religious significance. People from all across the country come here to take a bath in its sacred waters. However, taking bath in Pushkar during the month of Kartik Poornima assumes special importance and considered highly auspicious.

The Lake has been marked as one of the ten most spiritual places in the world. And individual amongst the five top divine places for Hindus in India. The Pushkar Lake consumes a catchment of the Aravalli hills covering an area of 22 square kilometers. The lake has a water surface area of 22 hectares (54 acres). It is a permanent lake sourced by the monsoon rainfall over the catchment. The depth of water in the lake varies from season to season from 8–10 meters. 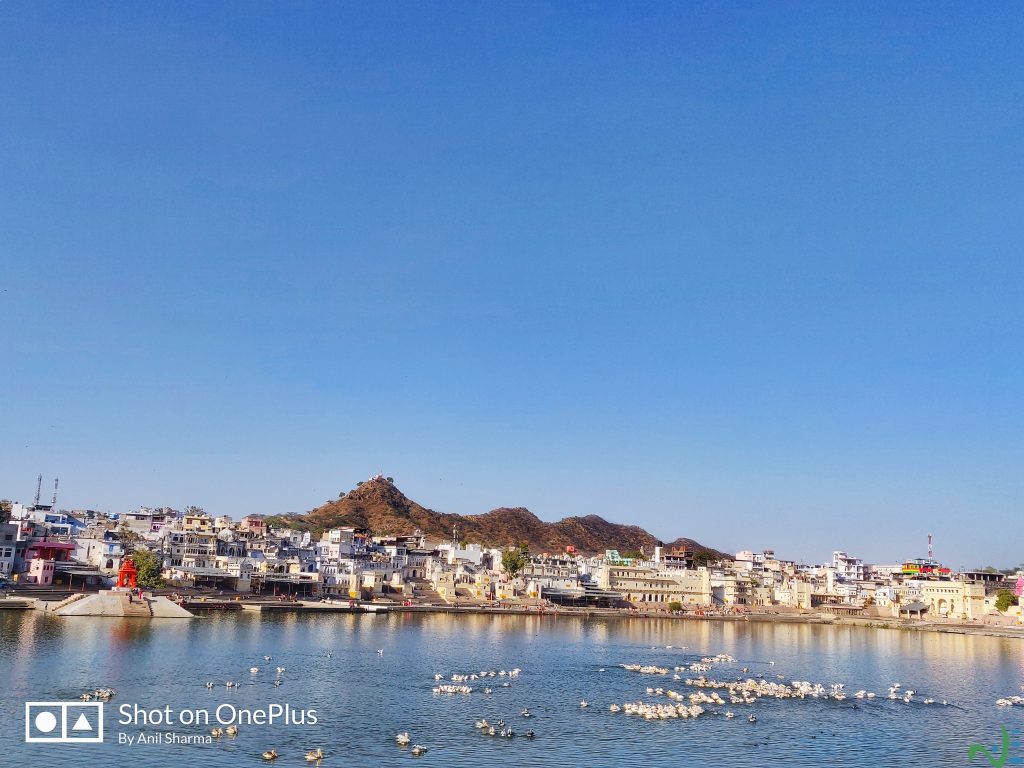 The Pushkar Lake is world-famous for Pushkar Mela (Fair) as well. The lake attracts thousands of followers every year to its shores, to gain spiritual superiority and attain salvation by taking a bath in its holy waters. At the same time, Pushkar Mela (Fair) beautifully displays the vibrancy of Rajasthan with fascinating colors, dishes, dance, cattle fair, and various entertaining sports and competitions.

The Pushkar fair is one of the central attractions at the lake and each year the fair begins at Prabhodini Ekadashi and ends at Kartik Poornima. Fair will also create a great business opportunity for the locals when visitors visit to participate in interesting events. The Pushkar fair is also Asia’s biggest camel fair.

The Savitri Temple is another one of the notable and most religious places in Pushkar. Built in 1687, Located on the top of Ratnagiri Hill and is one of the favorite places to visit in Pushkar. According to Hindu belief, Goddess Savitri was the wife of Brahma and she was supposed to reach a yagna which Brahma was performing but she couldn’t reach on time. To perform the yagna on time, Brahma married a local girl called Gayatri who thereupon became the second wife of God Brahma. All this made Goddess Savitri very angry.

To please her, the shrine of Savitri Devi was constructed.  Still today, the evening Arti is first performed in Savitri Temple and then in Gayatri Temple. The idols of both the goddesses are held in the Savitri Temple.
The temple served as a lookout from where she could watch her husband’s moves. The way to the temple passes through the hills so you can trek to the temple through Ratnagiri Hill.  However, you can also take the help of the ropeway to reach the temple. You will also see a picturesque view of Pushkar when reached the temple.

The Gayatri Mata temple is another devotion to the Lord Brahma’s wife Savitri. This temple is genuinely not very impressive, especially acknowledging the incredible religious structures in Pushkar. Temple’s location is just 15 minutes far from Pushkar lake. You can see the small hill just behind Pushkar straight to the north.

The Temple is set at the top of a hill by the side of the holy lake. To reach the temple, followers need to climb a hill, it’s not much of a hike. From the base, it might take you 10 minutes to reach the temple. The path is an old track on the hillside with a few parts of steps which is very easy to follow. While not as steep or high as the more popular, Savitri Temple, you’ll get a closer glimpse of Pushkar from the top. 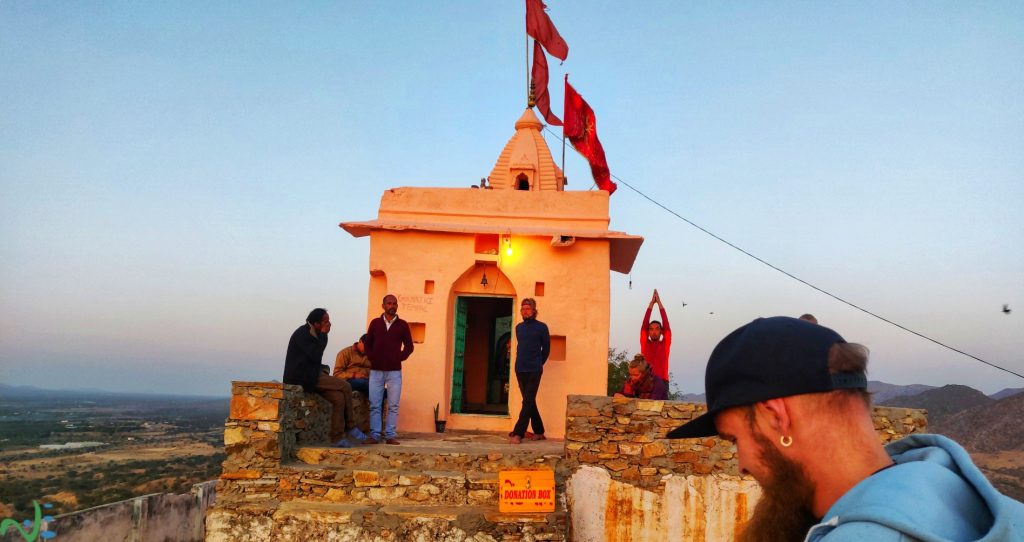 I have already told you that the best time to visit Pushkar is during the Pushkar Fair in the month of October – November. Otherwise, you can visit this place throughout the year except in the Summer months (May – June)

The ideal weather conditions to visit Pushkar Lake is from October to March months. The temperature varies around 25 degrees Celsius which is not too cold. The weather remains pleasant during this time. 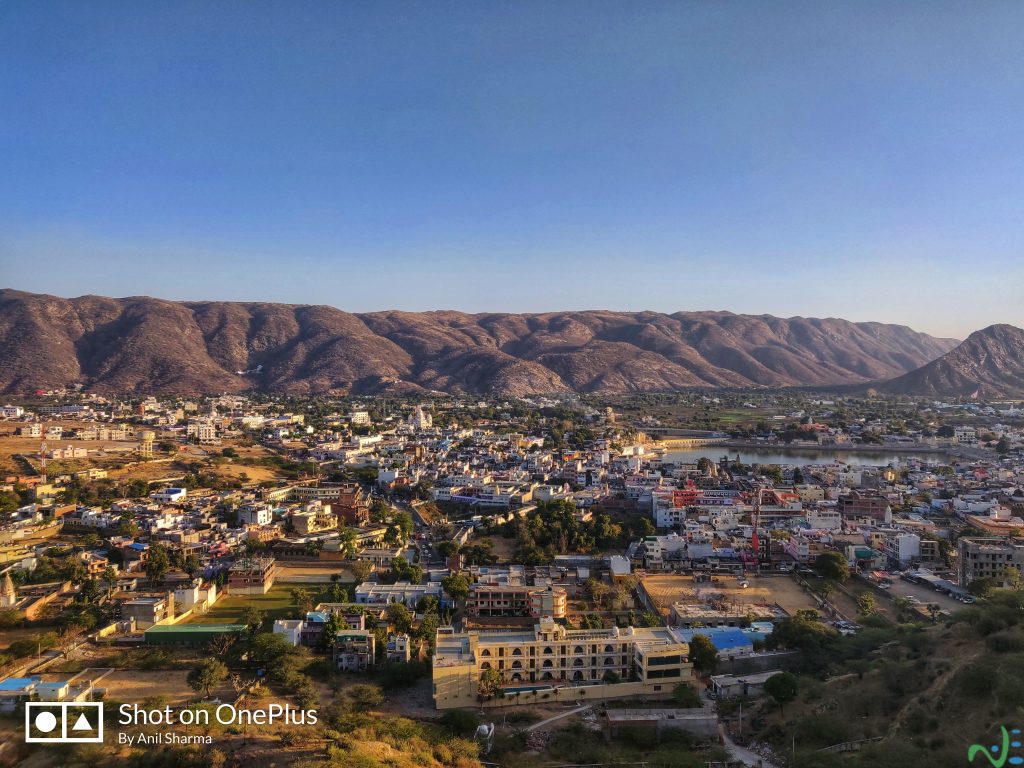 How To Reach Pushkar

Pushkar Lake is at the center of the city. One can easily reach here by hiring a taxi or bus from Ajmer.